Bridges around the world mean connecting any two points with a fixed distance between them. Some bridges are also world famous for their design and engineering. Bridges may be of different materials and may be of a different design. These bridges are constructed to cross rivers, lakes, valleys, mountains, or any other natural feature. Some common types of bridges include the suspension bridge, arch bridge, Beam Bridge, cantilever bridge, Bascule Bridge and truss bridge. Most of these bridges are also considered landmarks and engineering wonders of regions around the world. We have brought to you the list of the most famous bridges in the world. Here is the List of Beautiful & Famous Bridges in the World: 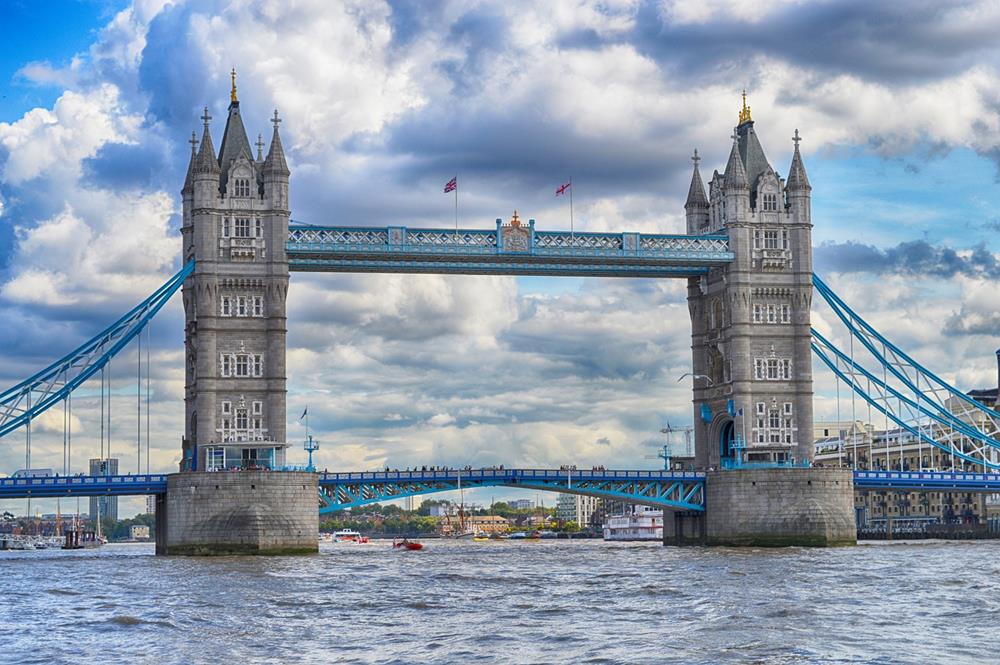 London Tower Bridge is a combination of a bascule and suspension bridge, built over the River Thames near the Tower of London. Construction of the bridge began in 1886 and was officially opened on 30 June 1894 by the Prince and Princess of Wales. The famous Tower Bridge is an iconic tourist attraction in London city of the United Kingdom and also one of the most popular landmarks in the world. Two sections of the bridge open about 3 times a day to pass the river traffic. 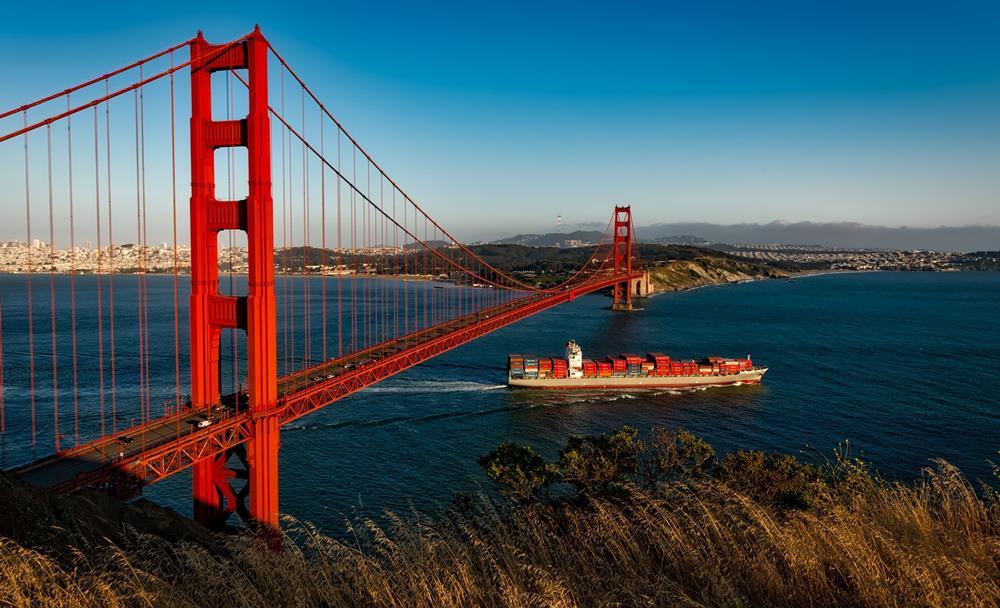 The famous Golden Gate Bridge is a spanning suspension bridge of the Golden Gate. The 1 mile wide (1.6 km) bridge is an iconic and world famous structure connecting the city of San Francisco to Marin County in California, USA. The construction was started on January 5, 1933, and Construction ended on April 19, 1937. The bridge was officially opened on May 27, 1937, for the public. The Golden Gate Bridge is the most photographed bridge in the world and is also considered to be one of the world’s most beautiful bridges. It is designed by engineers Joseph Strauss and Charles Alton Ellis and was a masterpiece of engineering of its time. 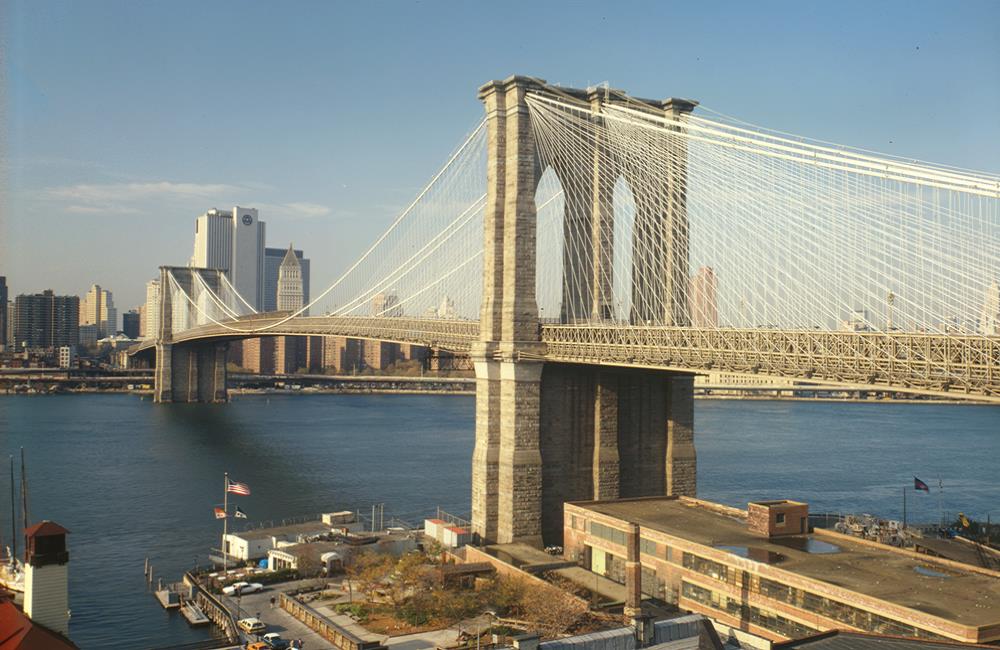 The Brooklyn Bridge is a hybrid cable-stayed / suspension bridge and is also one of the recognizable landmarks in New York City, USA. The Brooklyn Bridge is 5,989 feet (1825 m) long from one end to the other and connects Manhattan and Brooklyn. It was built between 1869 and 1883 in New York City, USA. It was the longest steel-wire suspension bridge in the world when it was completed in 1883. 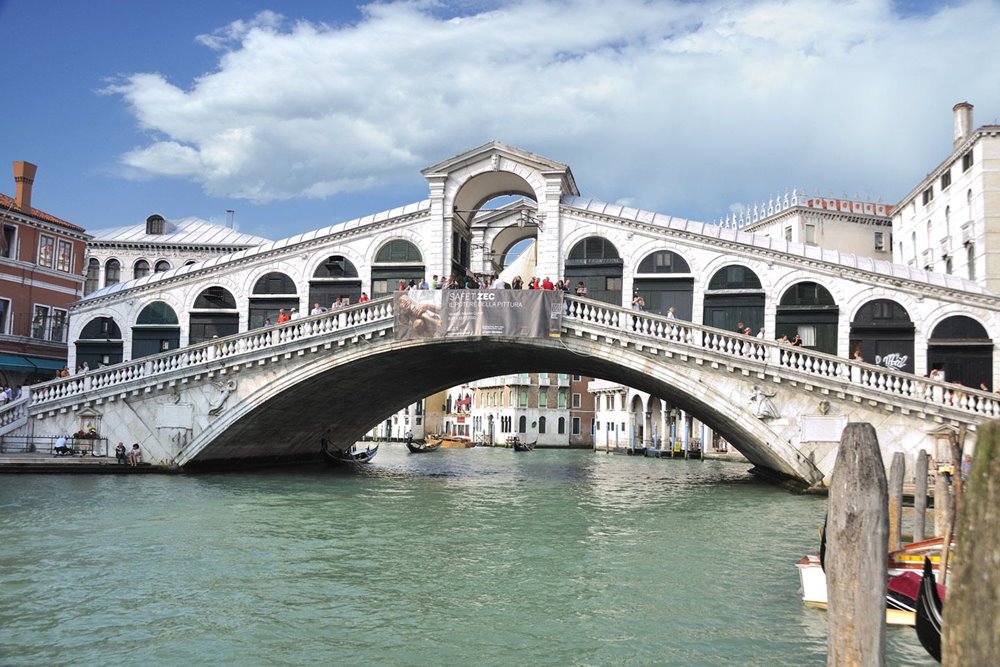 Rialto Bridge is the oldest stone-arch bridge over the Grand Canal and one of the famous tourist attractions in Venice, Italy. The bridge was first constructed by Nicolo Barattieri in the 12th century as a pontoon bridge. It has been rebuilt several times and the present structure of the bridge was built between 1588 and 1591. 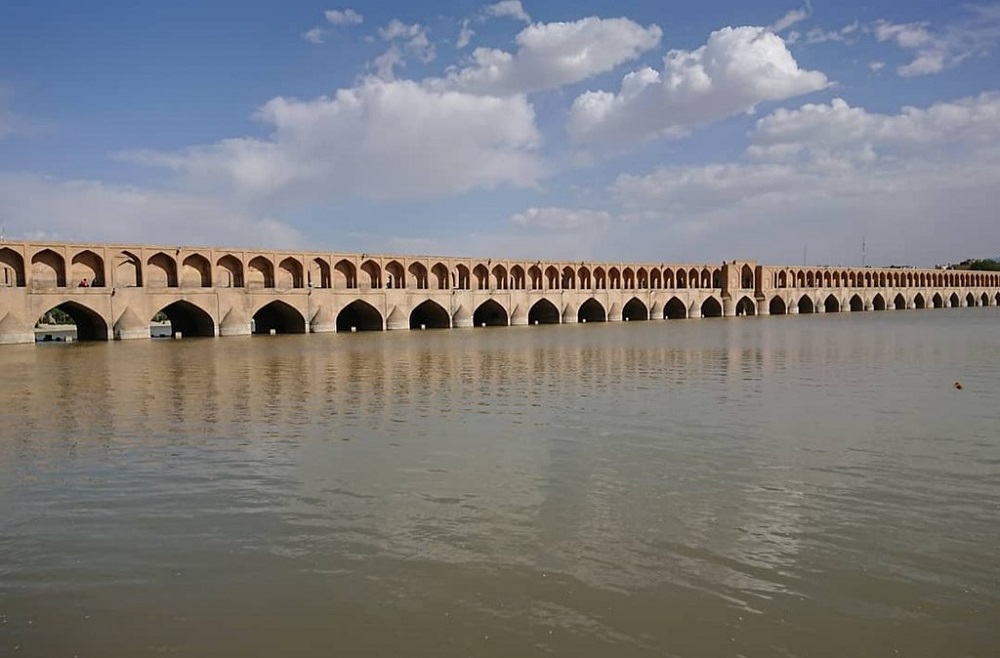 Si-o-se-Pol Bridge is a double-deck stone arch bridge, that was built between 1599 and 1602 in the city of Isfahan, Iran. It is the most famous bridge in Isfahan due to its size and beautiful architecture. It was constructed under the supervision of the commander-in-chief of the armies, Allawardi Khan Andildez, so it is also known as The Allahverdi Khan Bridge. The bridge has a total length of 297.76 m (976.9 ft) and a total width of 14.75 m (48.4 ft). 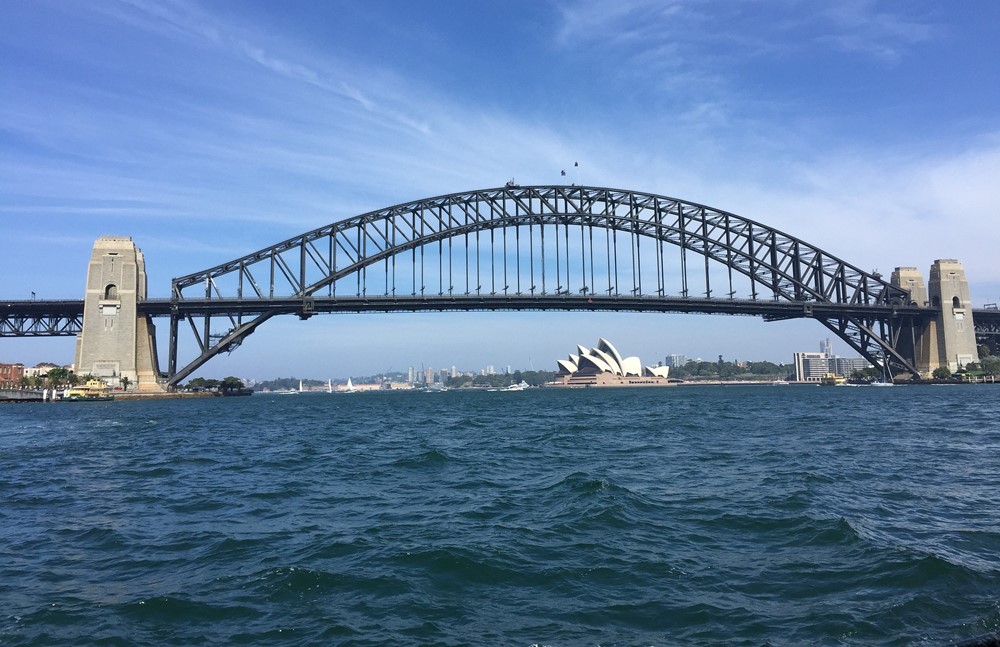 The Sydney Harbour Bridge is the world’s largest steel arch bridge with a total length of 1,149 m across Sydney Harbour, Australia. The Construction began on 28 July 1923 and officially opened on 19 March 1932. The bridge is a spectacular feat of engineering that was designed by the British firm Dorman Long & Co Ltd of Middlesbrough. 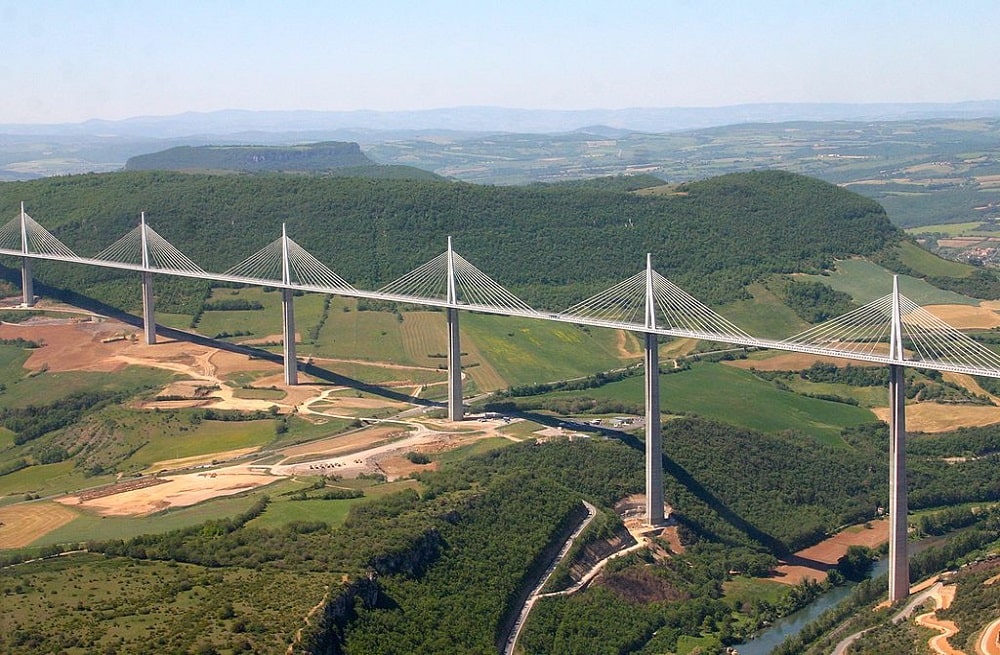 The Millau Viaduct is the tallest cable-stay bridge in the world. It is one of the amazing engineering and architectural wonders on the Taran River valley near Millau, Southern France. It is standing at an impressive 336.4 m (1,104 ft) structural height, and the total length of the bridge is 2,460 m (8,070 ft). The construction began on 16 October 2001 and officially opened on 16 December 2004. 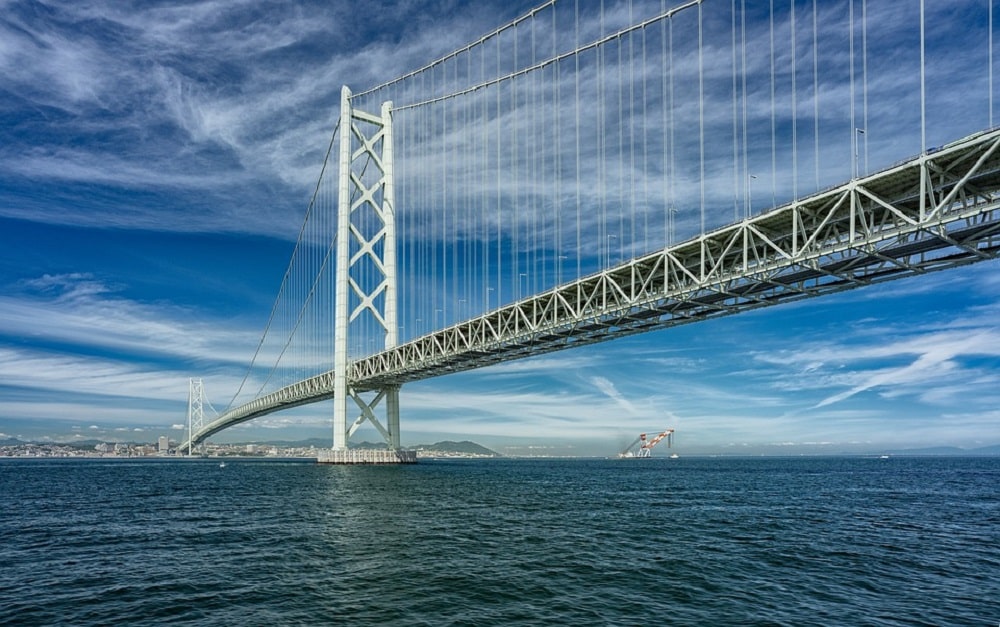 The Akashi Kaikyo Bridge (Pearl Bridge) is the world’s longest suspension bridge with a length of 3,911 meters (12,831 ft). Connects the city of Kobe and Awaji Island with a length of almost 4Km in west-central Japan. The bridge was constructed between 1988 and 1998, and it was the longest bridge in the world at that time. This suspension bridge is not only very long but also designed to withstand up to 8.5 magnitudes (on the Richter scale) earthquake. 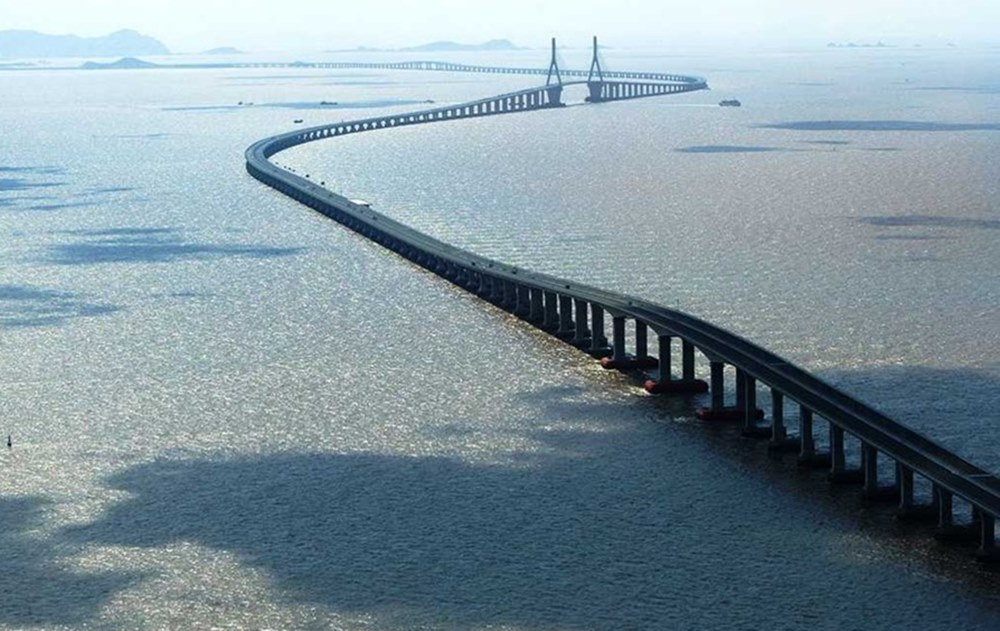 Hangzhou Bay Bridge is one of the longest sea-crossing highway bridges with a length of 36 km (22 miles). It was Constructed between ‎June 8, 2003, to June 14, 2007, and opened to traffic on 1 May 2008. The bridge connects two Chinese cities Jiaxing and Ningbo in Zhejiang Province. It looks S-shaped bridge when viewed from above. 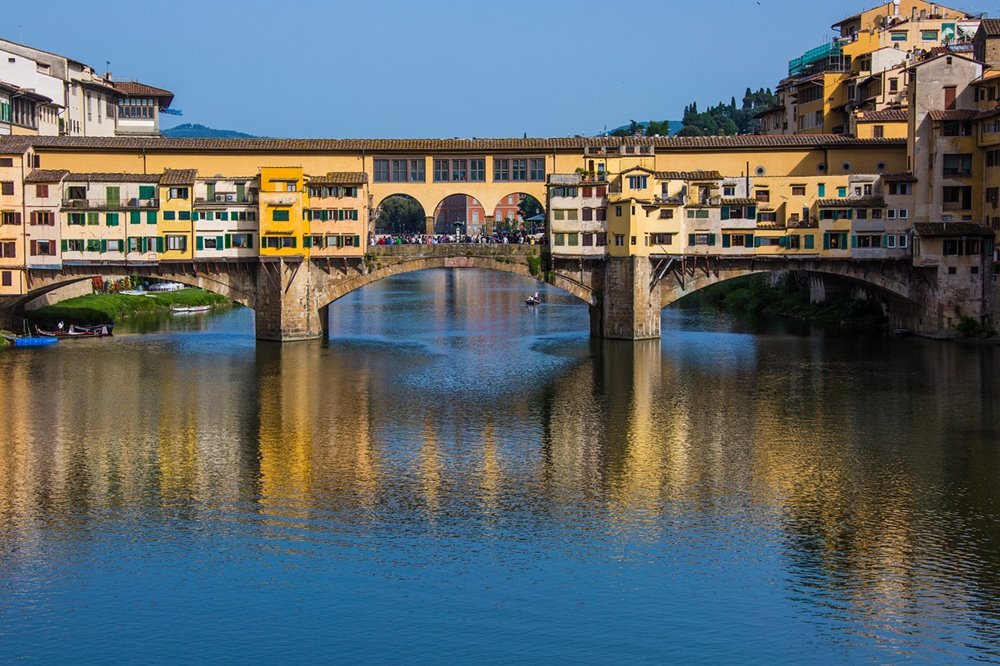 The Ponte Vecchio is considered one of the oldest medieval arch bridges in the world, built on the Arno River in Florence, Italy. It is believed that the bridge was first built in Roman times, it appears in a document of 996 and the current bridge was rebuilt in 1345. It is the only bridge that survived the Second World War in Florence. 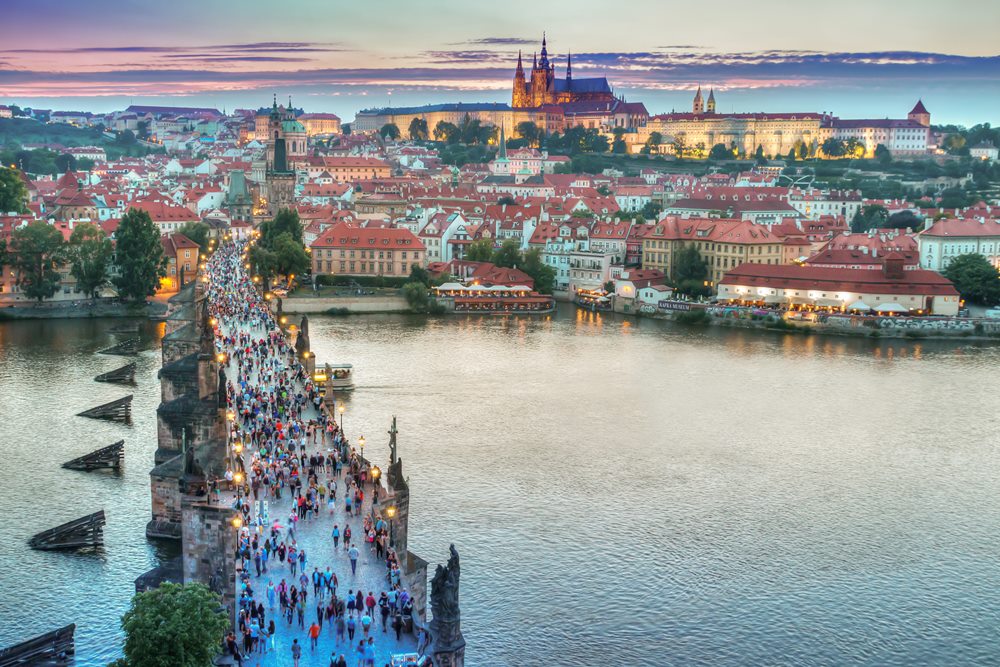 Charles Bridge is a stone Gothic bridge and one of the most beautiful bridges in Europe. It is one of the oldest bridges in the Czech Republic and still standing over the Vltava River in Prague. The first construction of the bridge was started in 1357. Charles Bridge is 516 m long, 9.5 m wide and stands on 15 pillars. 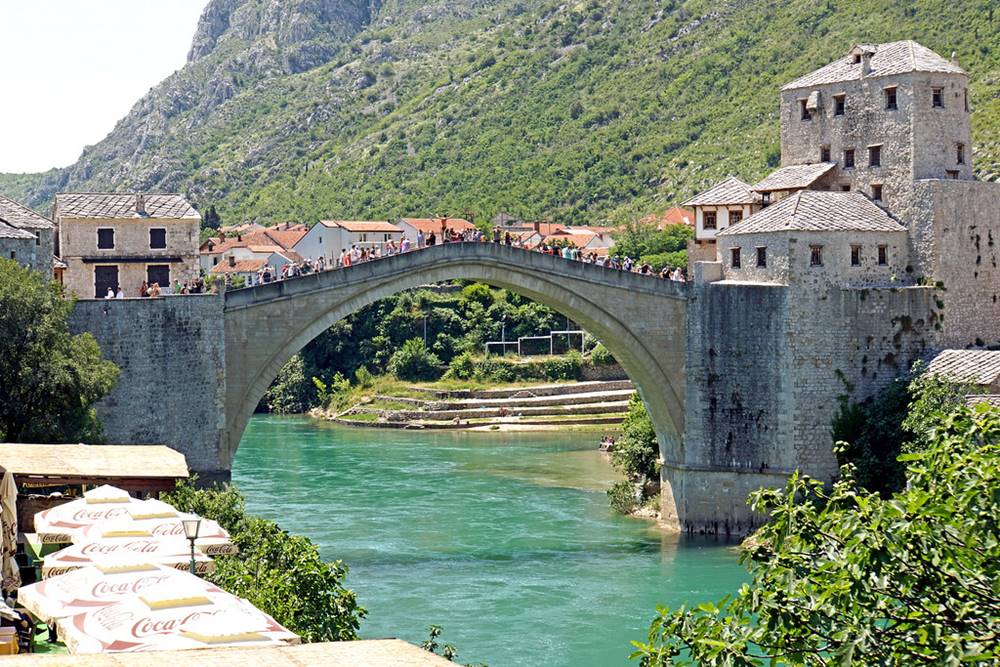 The beautiful Stari Most Bridge is 29 meters in total length and 4 meters wide and is built on the Neretta River. It is one of the city’s most iconic landmarks and connects the two sides of the city of Mostar. The construction of the stone arch bridge began in 1557 and the bridge took nine years to build and was completed in 1566. 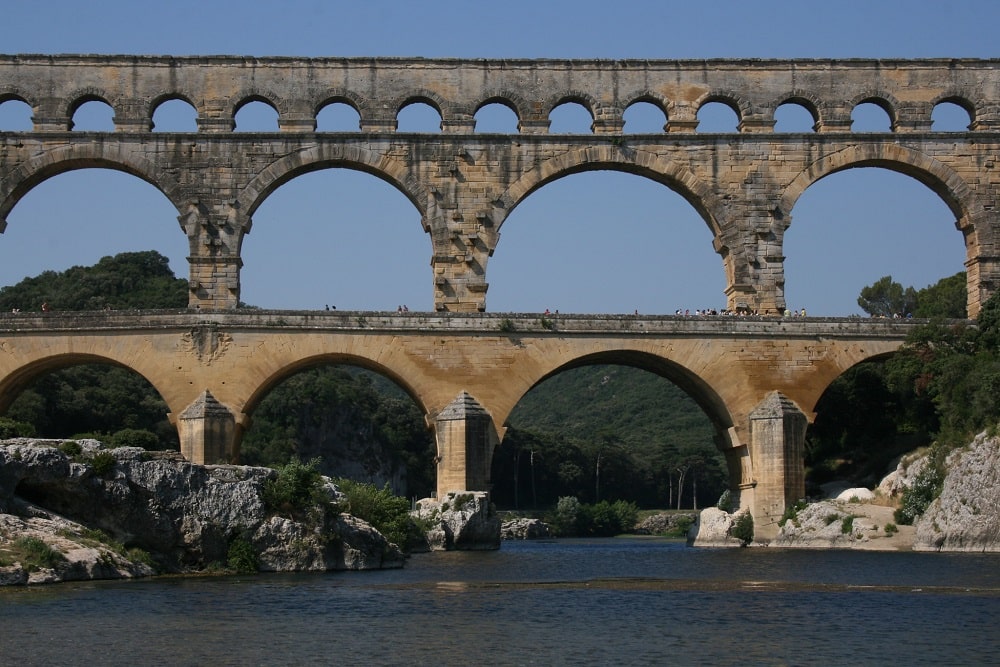 The Pont du Gard is a 275-meter-long ancient Roman aqueduct bridge. Built in the first century AD that served as the main component of a 50 km-long water canal in the Roman colony of Nemausus. The Pont du Gard Bridge was built over the valley of the Gardon River and is a World Heritage Site since 1985. It is one of the top 5 tourist destinations in France, with more than 1 million visitors every year. 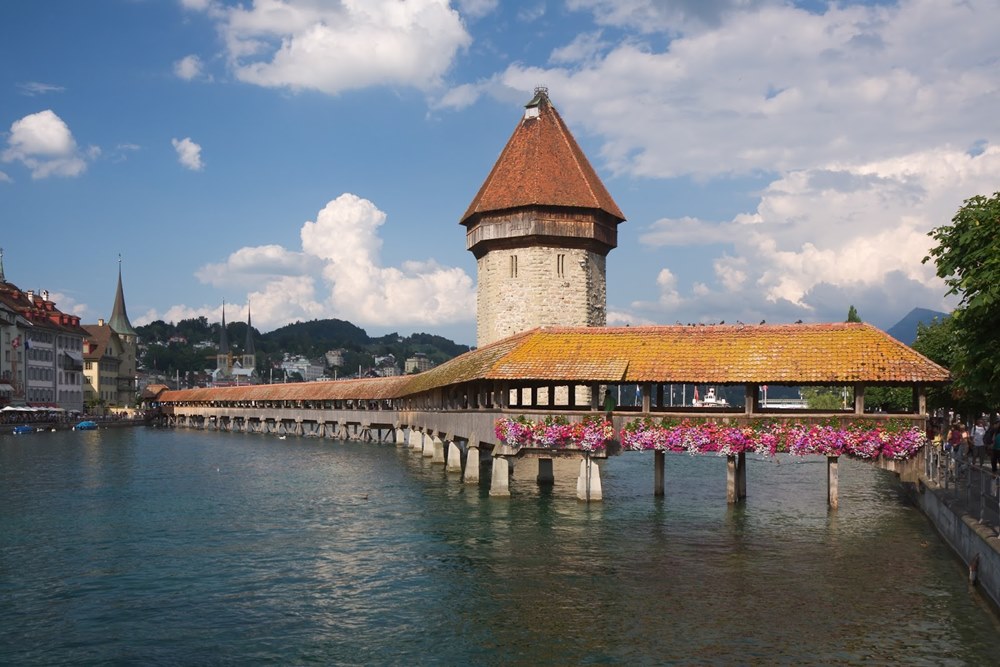 The Chapel Bridge (Kapellbrücke) is a 205-meter-long wooden covered footbridge over the river Reuss in Lucerne, Switzerland. It is one of the oldest wooden bridges in Europe, built-in 1333 and named after the nearby St. Peter’s Chapel. The Chapel Bridge is also famous for its amazing rooftop paintings that cover the entire bridge’s walkway. 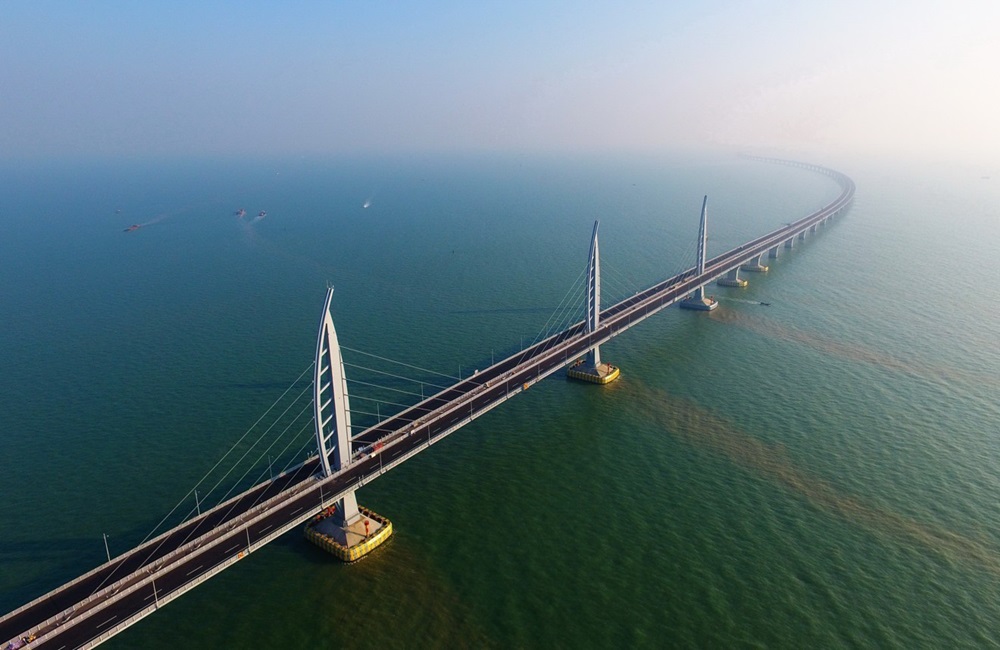 The Danyang-Kunshan Grand Bridge is the longest bridge in the world and it is the part of Beijing-Shanghai High-Speed Railway. It is the only bridge on earth with a length of 102 mi (165 Km), built from Shanghai to Nanjing in Jiangsu province, China. The Bridge was constructed in just 4 years between 2006 and 2010 and was opened for the public on June 30, 2011. 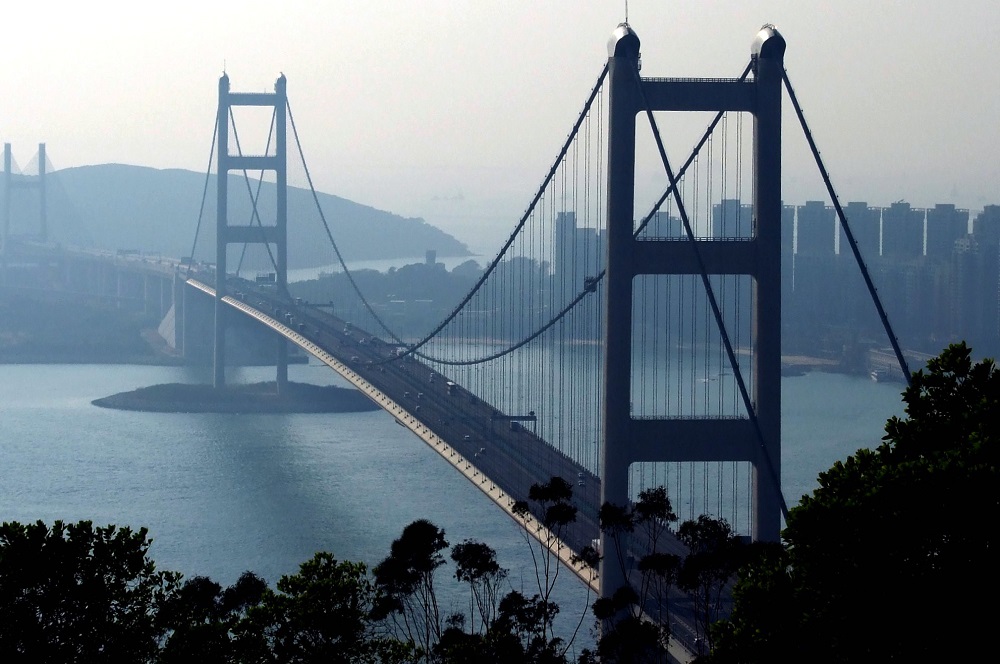 Tsing Ma Bridge is a magnificent piece of art located in Hong Kong. It was constructed on May 22, 1997, and enlisted in the world’s longest span suspension bridges. The longest span of the bridge is 1377 meters. The bridge is named after two islands it connects – Tsing Yi and Ma Wan. Tsing Ma Bridge was constructed to access the airport which was built at Lantau Island. The magnificent bridge is exemplary work of sophisticated skill and engineering. 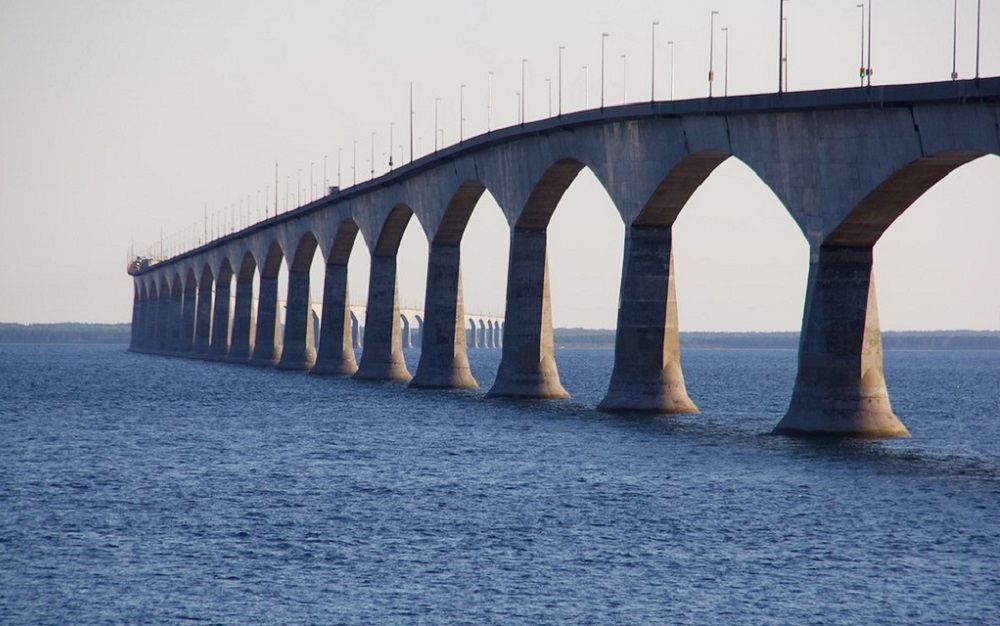 Confederation Bridge was constructed between October 1993 to May 1997 over ice-covered water. It connects the province of Prince Edward Island and the province of Brunswick. The majestic bridge is one of the most admirable achievements of engineering and architecture. It has made the life of farmers, fishermen, business persons, and citizens quite convenient and reliable by giving them access to Canada’s mainland. Annual inspection and maintenance are conducted to ensure the safety of people and vehicles. 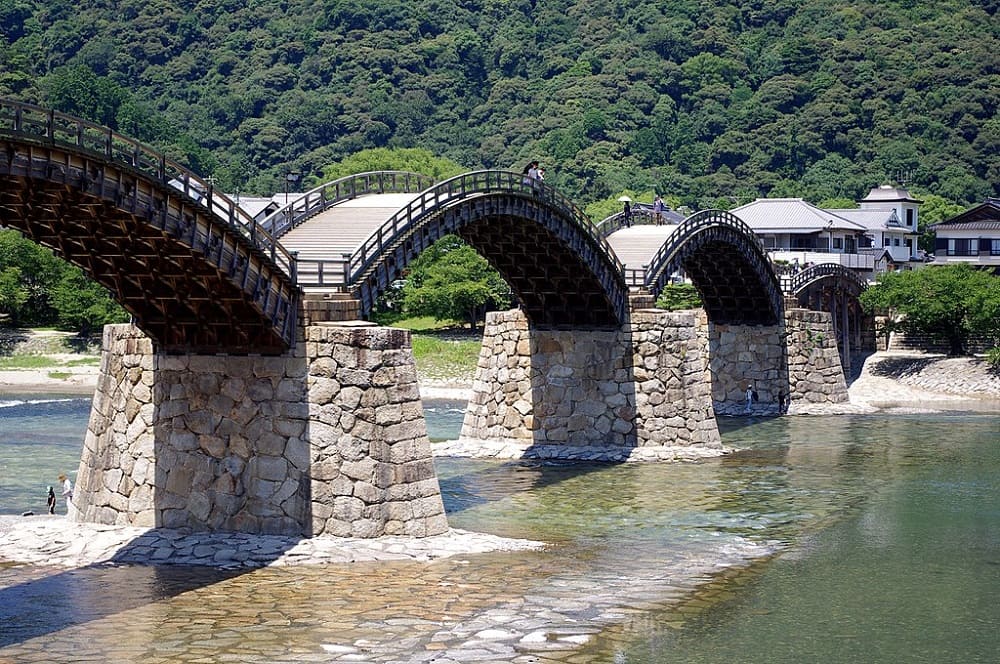 The marvelous wooden bridge is located in the city of Iwakuni (Yamaguchi Prefecture) of Japan. The Kintai Bridge was built in 1673 on river Nishiki flowing at the foothill of Mt.Yokoyama. On the top of the Mountain, there lies one of the famous Castles Iwakuni. The wonderful structure is in the form of five giant wooden arches. This splendid work of art in magnificent natural surroundings gives the entire place a fairyland look. This is one of the most attractive places where people adore the scenic view of Iwakuni city. 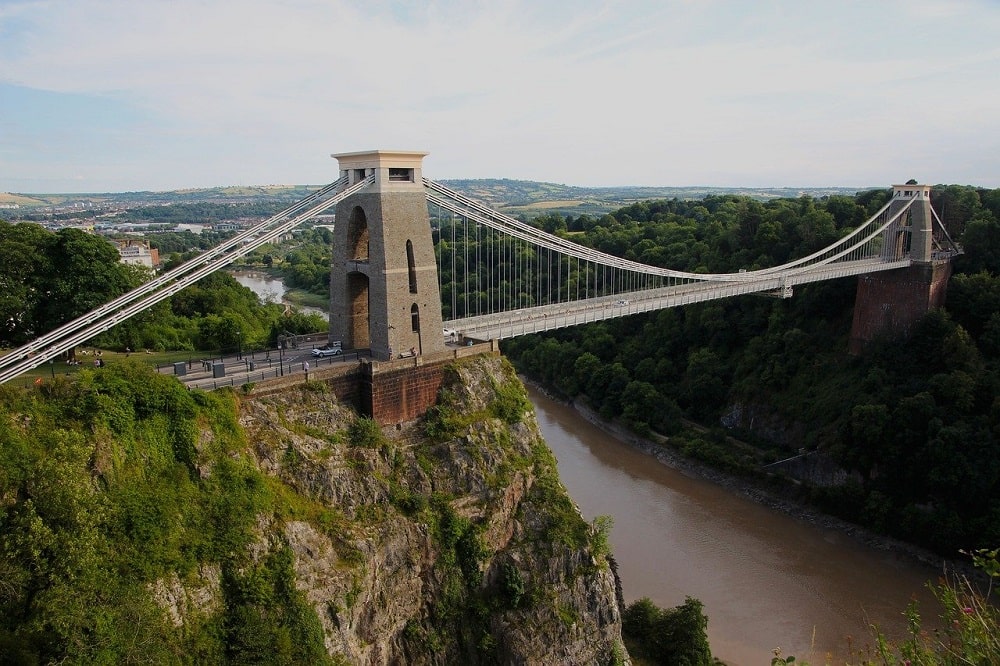 The suspension bridge passes over the Avon Gorge and River Avon. This glorious historic structure was built between 1831 to 1864 in the Victorian era. Clifton Suspension Bridge connects Clifton in Bristol and Leigh Woods in North Somerset. This bridge is the symbol of pride and historic achievement. This suspension bridge can withstand strong storms and earthquakes due to its flexibility and strength. It is a toll bridge for vehicles but people can walk on it free of cost. 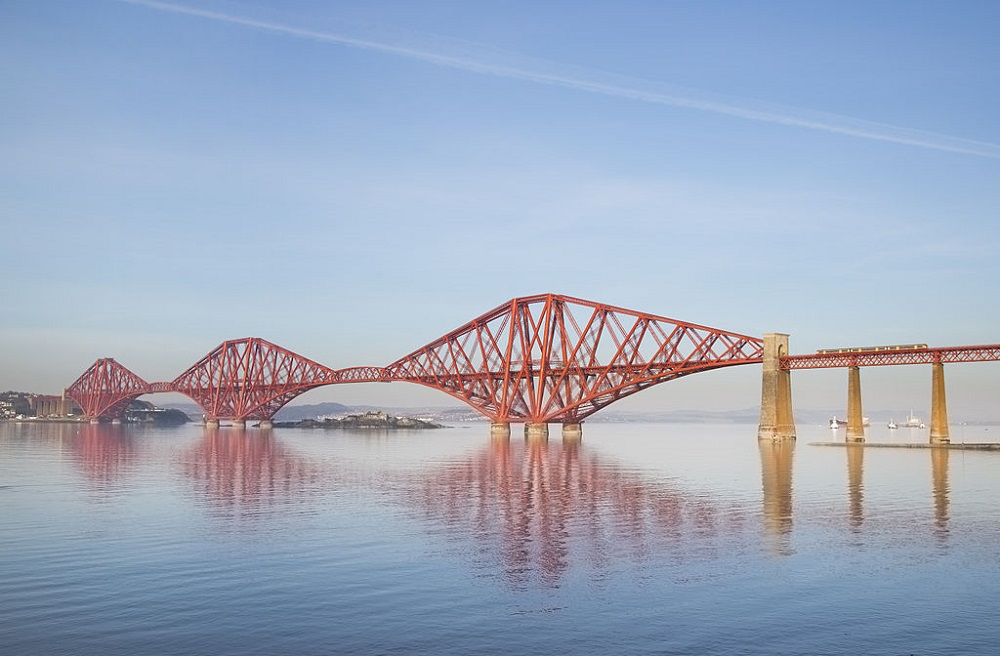 The Forth Bridge was constructed between 1882 to Dec 1889. This is a cantilever railway bridge built in East Scotland. The bridge connects the Firth of River Forth in Scotland and Edinburgh. The prodigious steel bridge is an icon of incredible engineering work by English engineers Sir John Fowler and Sir Benjamin Baker. Due to its remarkable structure and spectacular design, it is enlisted in UNESCO World Heritage Site.

The Royal Gorge Bridge is a suspension bridge located over the Arkansas River with a span of 880 ft between towers. The bridge was constructed between June 5, 1929, to November 1929, at Canon city of Colorado. 1292 wooden planks are covering giant steel structures. The royal gorge bridge is the most inviting and adventurous destination for tourists. There is tremendous to explore and do in this breathtaking place. There are amusement parks for adventure-loving people, they can enjoy mountain climbing, sky coaster, rafting, sky diving, and other exciting activities. It is an awesome place to visit with family and friends. 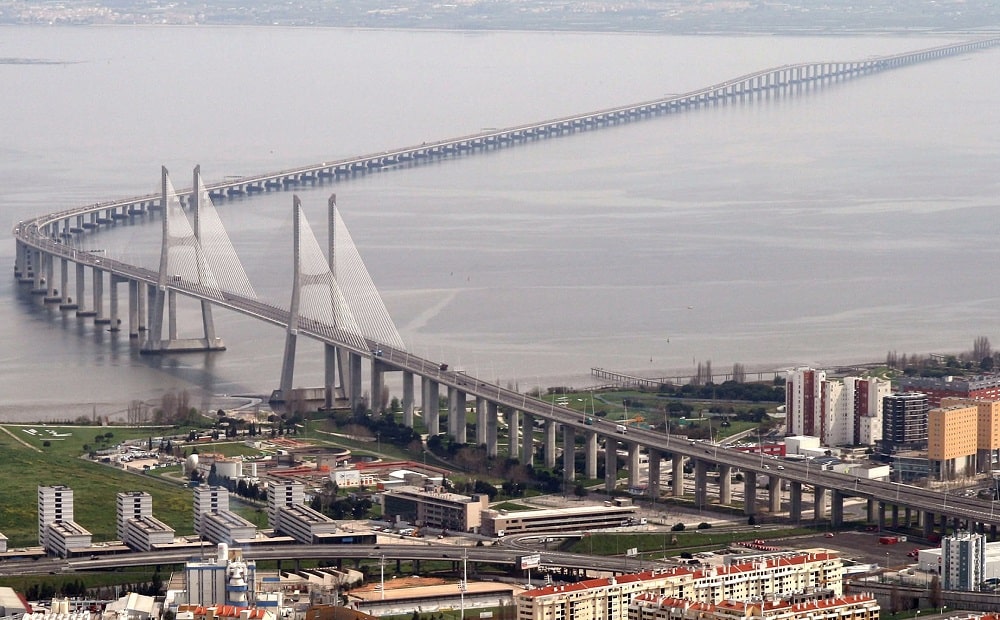 The cable-stayed Vasco Da Gama Bridge is impressive work of engineering and architecture. It is constructed between 1995 to 1998, the great achievement of Portugal is dedicated to celebrating 500 years of the Vasco da Gama voyage. It is located north of Lisbon crossing the Tagus river and connects. It is one of the longest bridges in Europe having a total length of around 12 Km, with six road lanes having a total width of 30m. Vasco da Gama Bridge joins the rural south bank to the developed city of Lisbon. It also ceases traffic congestion in the main city.

The Szechenyi Chain Bridge is a chain bridge located in Budapest. The chain suspension bridge was constructed between 1840 to 1849, its total length is 375m with the longest span of 202m. It crosses over the River Danube connecting the western and eastern sides of Budapest. The wondrous structure is named after Istvan Szechenyi, who was a great supporter of its construction. It is also one of the most famous tourist places in the world and has great significance for its people as it has a great influence on the country’s economic, cultural and social aspects. 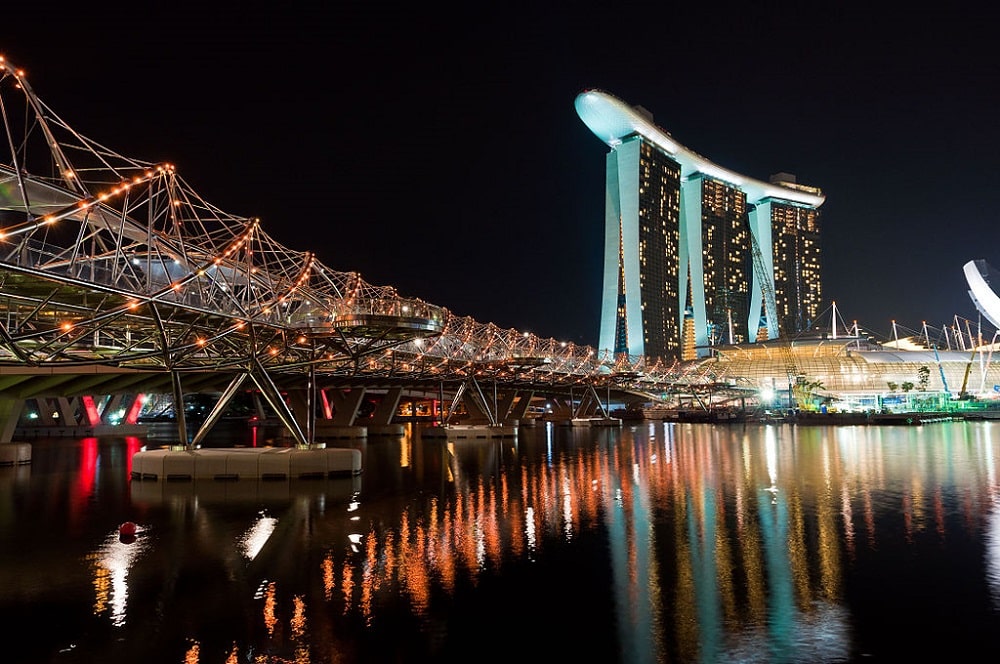 Helix bridge was earlier known as Double Helix Bridge. It is a pedestrian bridge in Singapore that was constructed between 2007 to 2010. The awe-inspiring giant structure is a work of unbelievable engineering and design construction. It links Marian Centre to Marian South in Singapore. This great structure is the epitome of architecture and technology, which won the World’s Best Transport Building award and Engineering Safety Excellence Award. The bridge has four platforms that deliver an incredible skyline view of an exotic Singapore city. 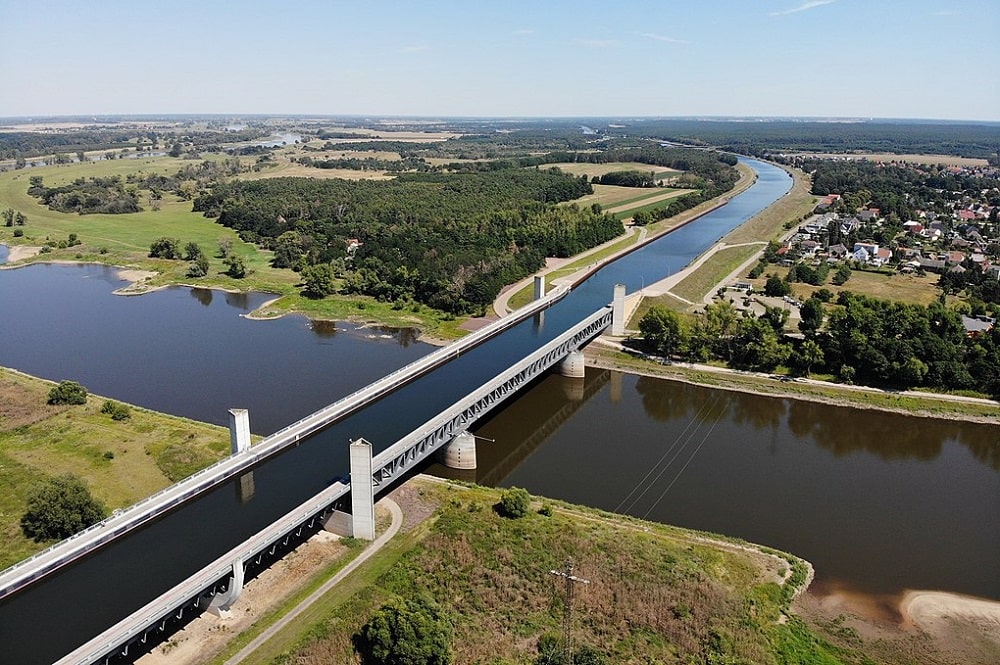 The Magdeburg Water Bridge is located in Magdeburg in Germany. It crosses over the river Elbe and links Mittelland canal with Elbe-Havel. The bridge was constructed between 1998 to 2003, its length is 918m with the longest span of 106m. the bridge was built with the motive to excel the commercialization in the city by allowing transport of goods. This water bridge is a Navigable aqueduct in Germany that helps the ships to cross over the Elbe River to the Mittelland canal conveniently.