There are many such things in the world, which are famous for their specialty. As big as the world is, it is also full of strange and surprising things. Countless bridges have been built in the world, but some bridges have been built so beautifully and they have a wonderful image all over the world. Each of these bridges is famous for its different characteristics. Today we will tell you about some of the most famous bridges which have been included in the list of beautiful bridges in the world. Here in this list, we are not ranking the bridges, we are sharing some of the beautiful and amazing bridges around the world. Let’s know about some of them:

The beautiful Golden Gate Bridge is located in San Francisco, California. This bridge was designed by engineers Joseph Strauss and Charles Elton Ellis. It is also one of the longest suspension bridges in the world with a length of 2,737 meters. This bridge was unveiled on 27 May 1937, and since then it has been known as the symbol of the city of San Francisco. Golden Gate Bridge bridge is 27 meters (90 feet) wide and 67 meters (220 feet) high above sea level. Millions of dollars were spent on Golden Gate Bridge when it was constructed and now it is one of the most famous tourist attractions in the world. Its color is orange so that it can be seen even in the mist. 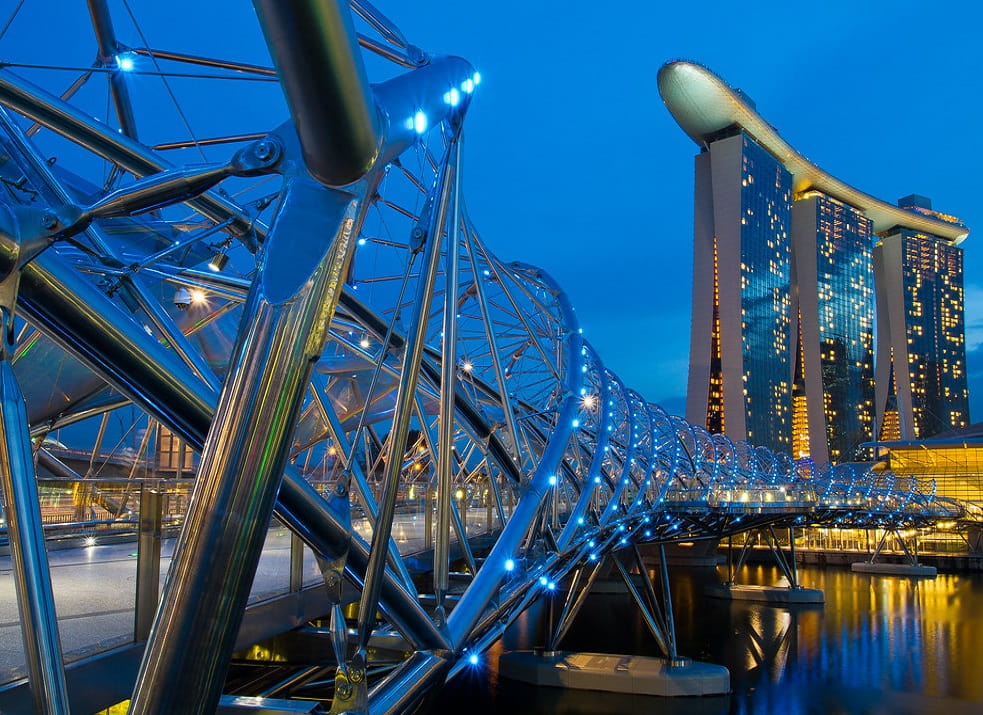 Singapore is known to be at the forefront of modern architecture in the world. One of the most beautiful places that you should never miss during your Singapore trip is the Helix Bridge near Marina Bay. It is a footbridge that is 280 meters long and was built between 2007 and 2010 to connect Marina Center with Marina South in the Marina Bay area. Whether it is night or day, it looks very beautiful, at night the bridge is illuminated with blue light, and a large number of tourists come here from far away and take photographs.

The beauty of Vietnam country has always been the center of attraction for the people. The golden bridge is the most beautiful bridge in Vietnam that attracts people from all over the world. The structure of this famous bridge is so spectacular that the breath of the onlookers stops for a moment. Only two big artificial hands are holding this beautiful pedestrian bridge, here Lobelia chrysanthemum flowers have also been planted on both sides which makes it naturally attractive and beautiful. The golden bridge is built at an altitude of about 1,400 meters above sea level, whose length is about 150 meters. This bridge is at the top of the visit list of visitors to Vietnam. 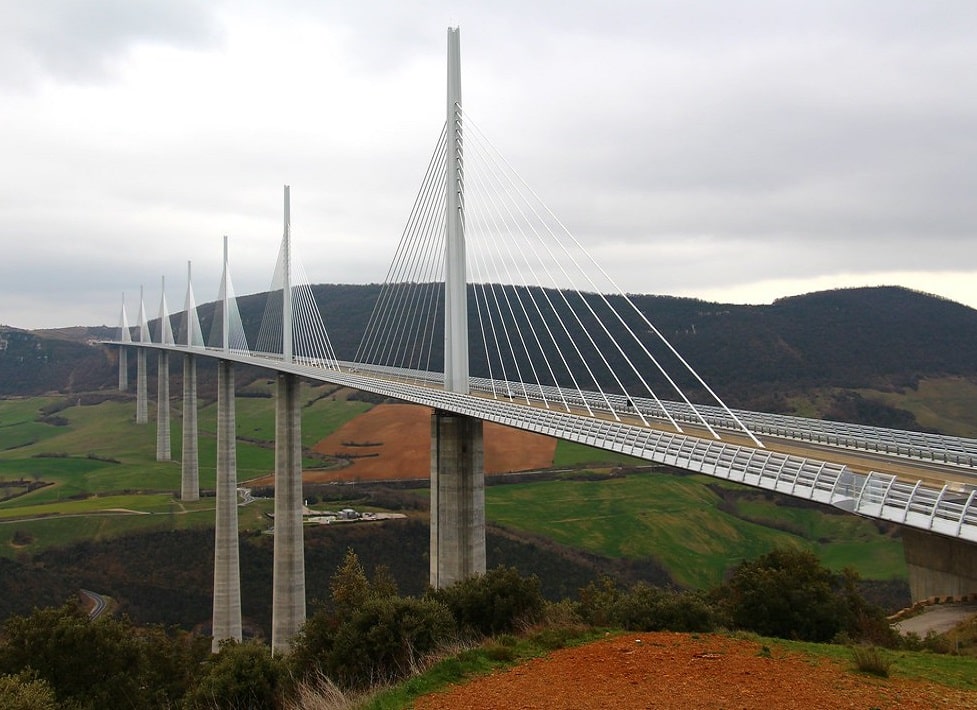 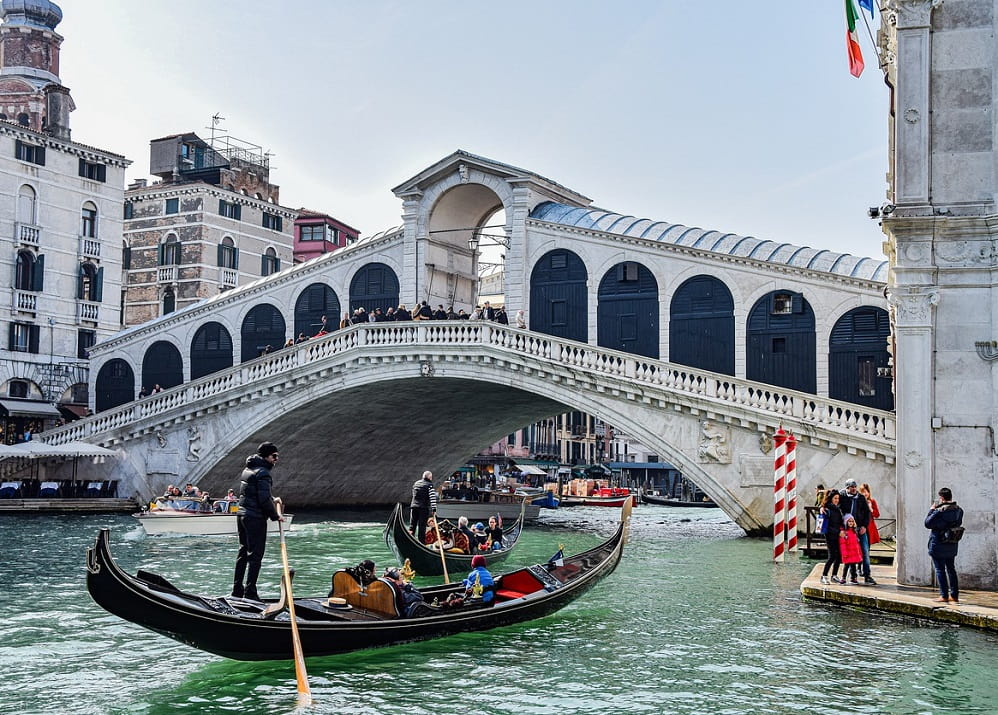 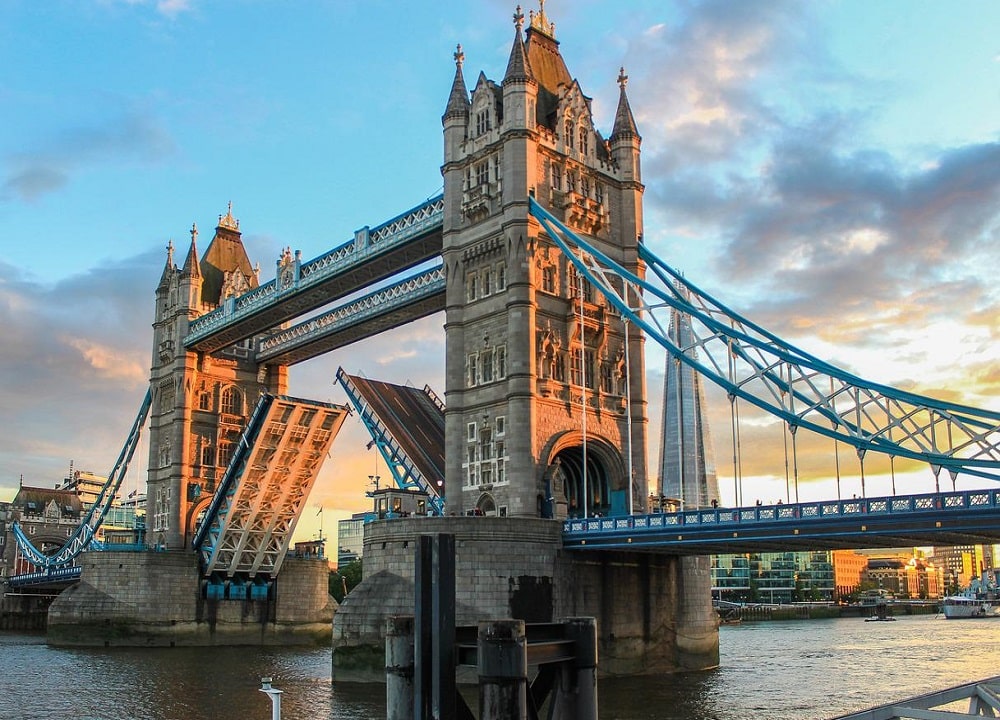 London is the capital of England and it is one of the most beautiful places in the world. The Tower Bridge here is said to be the pride of this city and one of the famous tourist attractions in England. It is built over the River Thames, construction began on 21 June  1886 and was completed on 30 June 1894. The unique architectural structure of this bridge makes it different from other bridges in the world. The specialty of this bridge tower is that when a ship has to pass through the river Thames, it is raised on both sides and only then the ship passes under the bridge.

Sydney Harbour Bridge is the largest steel arch bridge in the world, it is very beautiful and gorgeous to see. The iconic bridge connects the north and south shore of Sydney. The bridge can be crossed by rail, train, bicycle and also on foot. Sydney Opera House is also situated in the same location, which adds to its beauty.  Tourists can climb the south side of the bridge and take in a beautiful view of the entire city. Tours here run from sunrise to sunset, only interrupted in case of a lightning storm or strong wind. Sydney Harbor is also considered one of the most famous tourist destinations in the world. 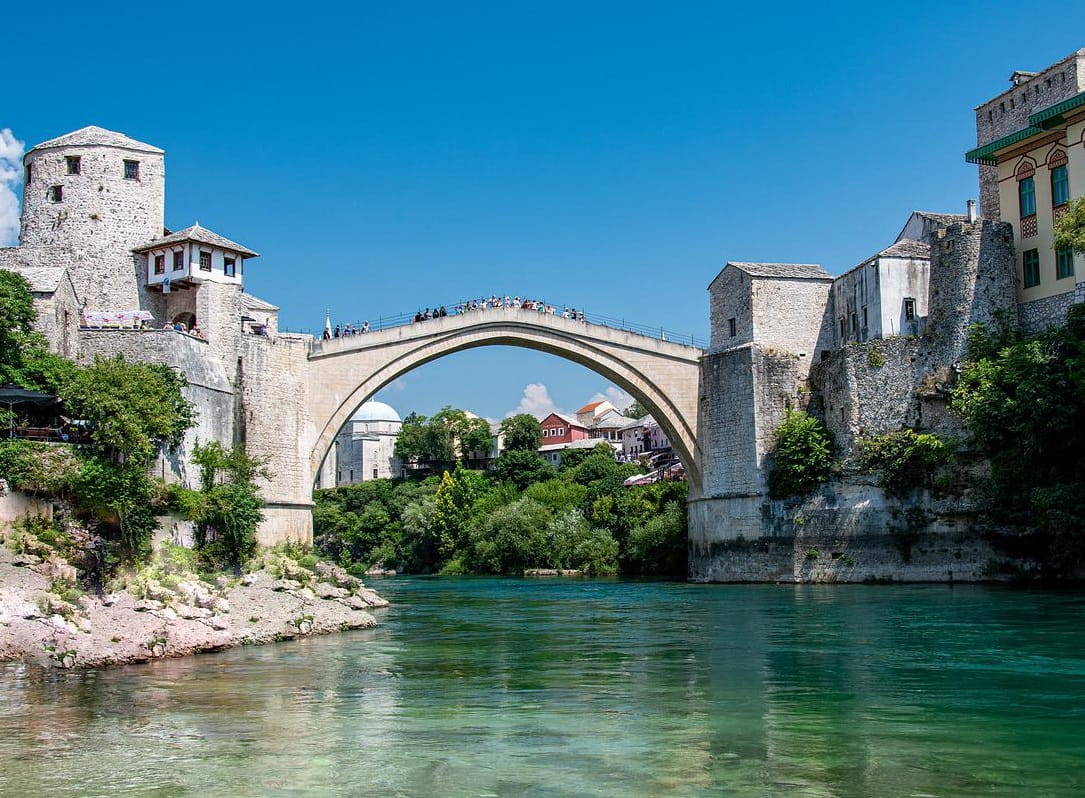 Stari Most bridge is a recognizable landmark of the country and one of the most beautiful and amazing bridges in the world. It is a hump-backed stone arch bridge over the Neretva River in the city of Mostar, Bosnia and Herzegovina. It is one of the oldest bridges, the old structure was built between 1557 and 1566, and it was rebuilt between 2001 and 2004. It looks very beautiful to see, so people come here from far away and take pictures for their memories.

Chengyang Bridge is one the most famous and beautiful bridges in the world, it is also known as the “Wind and Rain Bridge”. It was built in 1912 over the Linxi River. The Chengyang Bridge is considered to be the unique architecture of the Dong people living in China. The length of this bridge is about 64.4 meters, the width is 3.4 meters and the height of the bridge is 10 meters. The specialty of this bridge is that it is made only of wood and stones and no nails or bolts have been used to connect it, and still is in use. 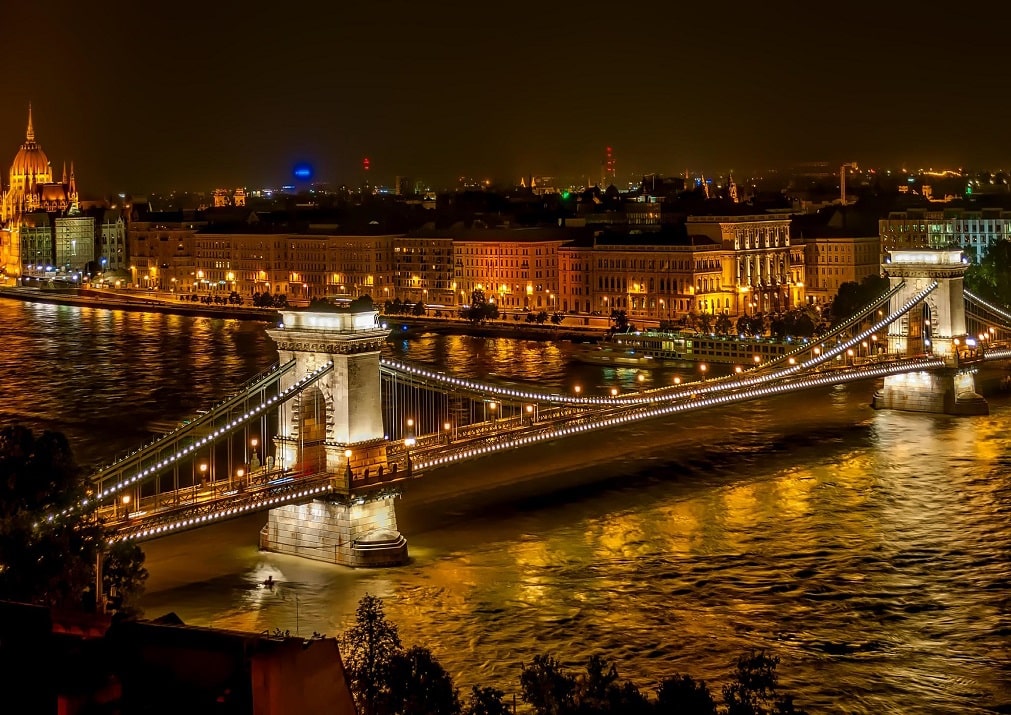 The “Szczeciny Chain Bridge” is a suspension bridge built with stone towers and distinctive lion statues at the ends of the bridge. It connects Pest and Buda over the Danube River. over the Danube River. It is one of the iconic structures of Budapest, the most widely known bridge over the Hungarian capital. The “Szczeciny Chain Bridge” is 375 meters (1,230 ft) in length and 14.8 meters (49 ft) wide. Its longest span is 202 meters (663 ft) high and is one of the largest in the world. It is designed by English engineer William Tierney Clark and Scottish engineer Adam Clark to build a beautiful structure. 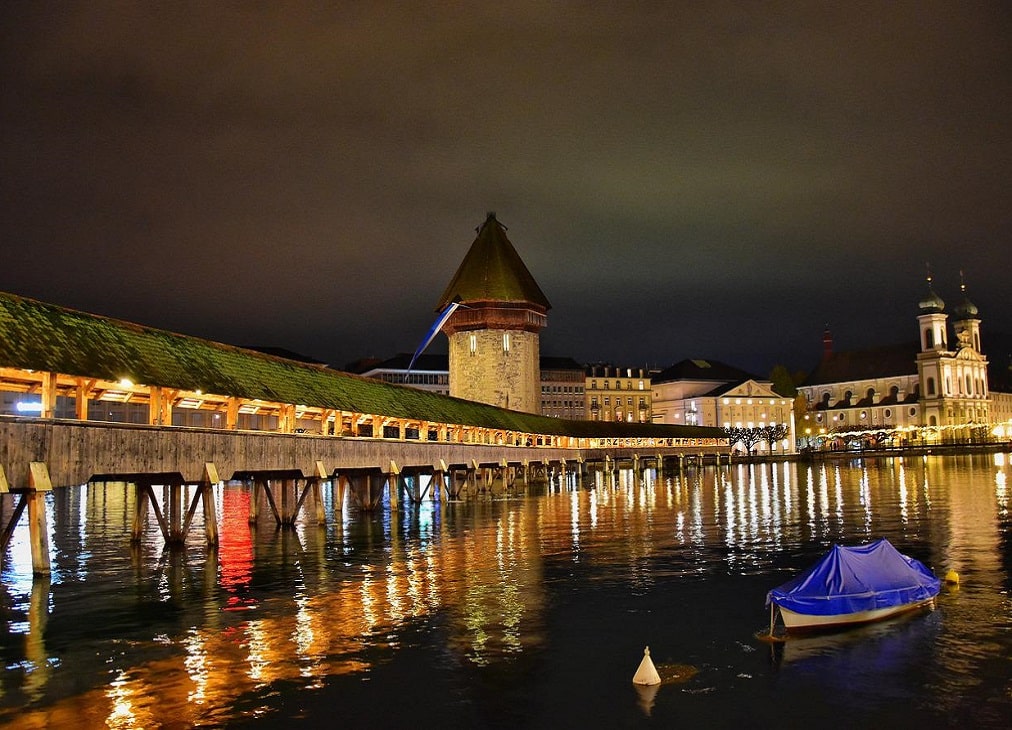 The Chapel Bridge (Kappelbrücke) is one of the most beautiful bridges in the world, and it crosses the Reuss River in the city of Lucerne, Switzerland. When it was built it had a total length of 270 meters. It shortened over time and now has a total length of 205 meters.,  It is a wooden footbridge named after the nearby St. Peter’s Chapel. It is the oldest covered wooden bridge in the world and was built in 1333. Lucerne’s timber bridge is also one of the most photographed destinations in Switzerland. The bridge has many beautiful interior paintings, which makes it even more mesmerizing. 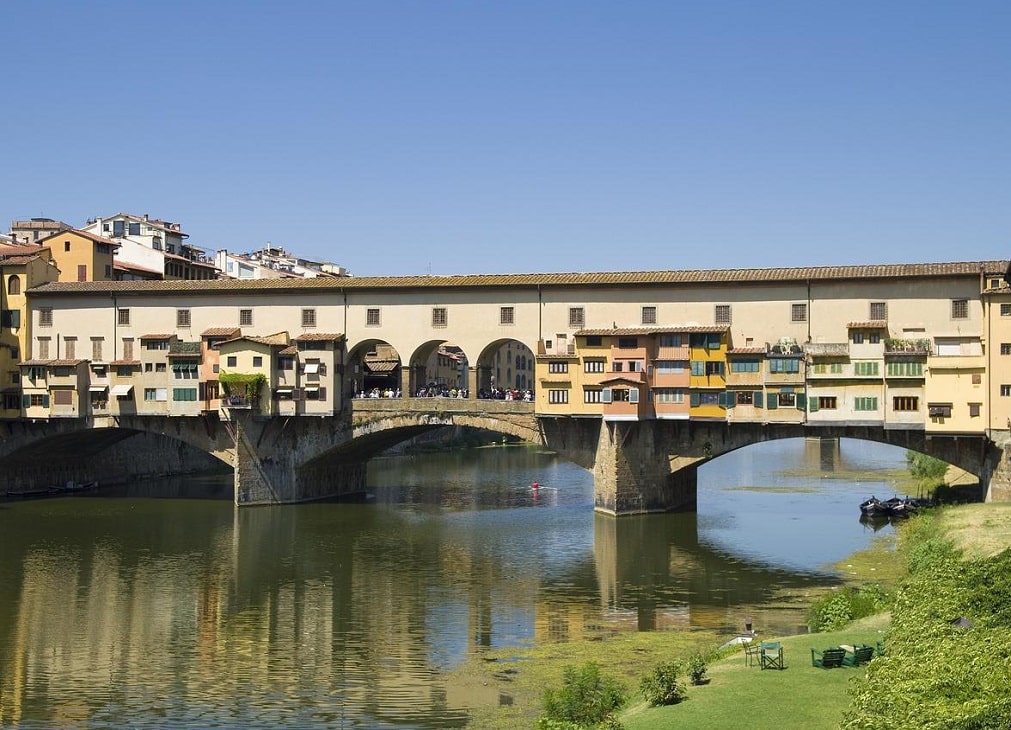 If you come to Italy, you will find many oldest bridges here. Ponte Vecchio bridge is also one of the oldest bridges in the world, it’s a medieval stone arch bridge that crosses over the Arno River in Florence, Italy. It is an iconic symbol of the excellent engineering of Europe’s Middle Ages. This bridge has been made in such a way that there is a small market on it, so many types of shops are available on the bridge, you can also take photos with your favorite food. 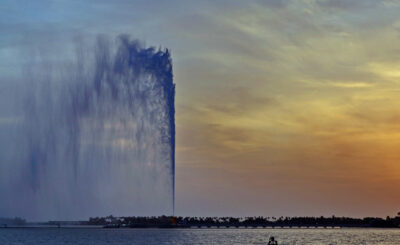 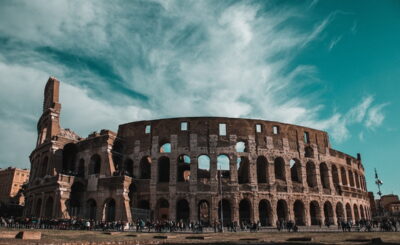